Since 2012, hundreds of thousands of Rohingyas have fled to Bangladesh from the Rakhine State in Myanmar. Not all who escaped reached the shores of Bangladesh. A large number of Rohingyas have taken refuge in Southeast Asian countries such as Malaysia, Thailand, and Indonesia.

Rohingyas have also been living discreetly in Nepal, a landlocked Himalayan country located in South Asia. They have established a settlement in a quiet part of the Kathmandu city. In the past few years, I have had the opportunity to travel to Nepal multiple times and interact with members of the Rohingya community in Kathmandu. In this piece, I share some of the observations from my visits.

From Rakhine State to Kathmandu

The Kathmandu Rohingyas had escaped Myanmar in 2012 in the wake of a series of local clashes between ethnic Rakhine Buddhists and Rohingya Muslims. Fearing for their lives, they took refuge in Ukhiya, Cox's Bazaar in Bangladesh. After spending half a year in a camp, they migrated to Assam in India where they spent about one month. 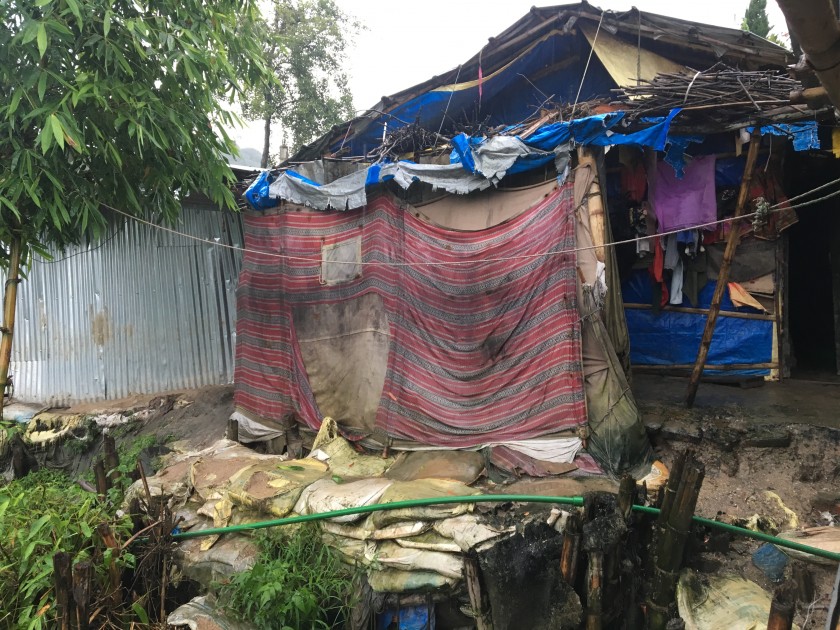 A house built in Kapan by Rohingyas

As India and Nepal share an open border, it dawned on them that they could try their luck in Nepal. From the Jogbani area in Southern Nepal, they crossed the border without difficulty and made their way to Kathmandu. At the time, they were merely 11 people from 3 families. They chose Kathmandu over other places because they had heard good things about Kathmandu. Kathmandu appeared to them as a peaceful city where they could potentially start a new life without many problems.

In Kathmandu, a local Muslim who they had met in a mosque helped them to settle down in a place called Kapan. The Rohingya group then invited their family members and relatives to come and live in Nepal. Today, Kapan hosts more than 500 people from 105 families. Out of whom, only 120 of them who had arrived before 2013 received “UNHCR refugee cards”.

If 'home' means freedom of movement within a territory, Rohingyas have certainly found a home in Nepal. Compared to those living in refugee camps elsewhere, Rohingyas in Kathmandu can move in and out of their houses whenever they want. Though they live in a specific settlement area, they have been able to move around and find work in the city. However, their life in Kathmandu is far from easy. The material conditions of the settlement are poor. They live in weak makeshift structures which often get flooded in the rainy season. Besides, they have a shared toilet/bathroom for the whole community which reflects a poor sanitation condition.

Rohingya men mostly work as informal workers to earn daily wages such as construction workers, carpenters and manual workers. As undocumented workers, they earn remarkably low wages. With their limited income, they pool together money from each household and pay an annual rent of Rs. 150,000 (around 38,210 Baht) to the landlord.

While men work outside, women are confined to the household in keeping with their socio-cultural norms. The women in the community take care of their children and household works. Whenever I visited the settlement in Kapan, I noticed that the women would not come out of their houses without Burqa when outsiders were present. They have limited information about the outside world and are apparently totally dependent on the Rohingya men. 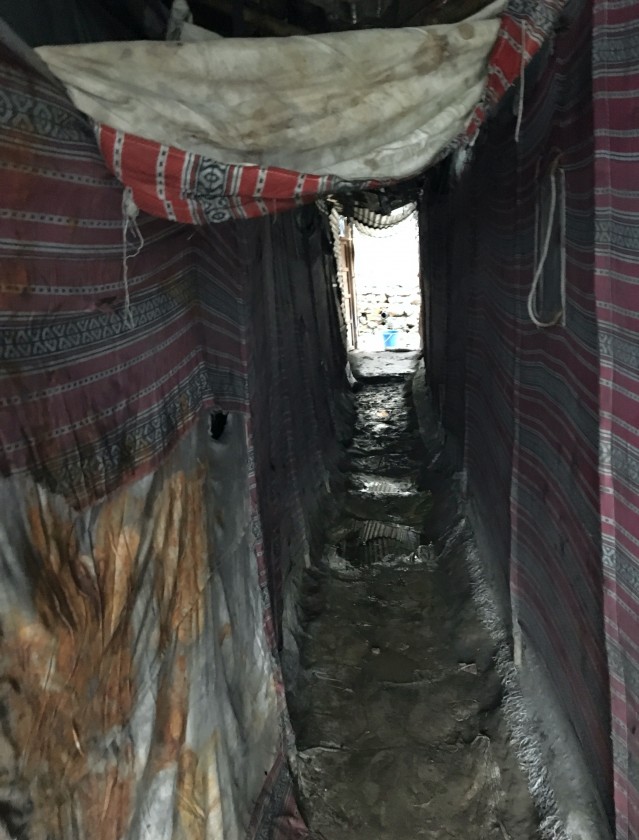 An alley passing through the settlement

So far as Rohingya children are concerned, they go to a local school in the area. I found them very cheerful and interactive. In one of my visits, I casually asked a young boy as to which course he liked the most in his school. He deftly answered, "Mathematics." He further shared that he wished to be a pilot in the future. It struck me that if a Thai child was able to communicate in English confidently, I would immediately think that he or she has a bright future. In the case of that Rohingya child, I was worried if he would be able to fulfill his dreams. He was too young to come to terms with his statelessness, but like any child, his dreams and aspirations knew no boundaries.

Though Nepal is not a signatory to the Refugee Convention 1951, Nepal has been hosting refugees from a number of countries on humanitarian grounds. The two main refugee communities in Nepal are Tibetans and Bhutanese. More than 100,000 Bhutanese refugees have already been resettled in different parts of the world through a third country resettlement program with the help of UNHCR and IOM. There are at least 7,000 Bhutanese refugees remaining in Nepal. On the other hand, the presence of Tibetan refugees is still significant. There are at least 20,000 Tibetan refugees in Nepal.

Rohingyas constitute the latest refugee community in Nepal. Technically, they are 'illegal migrants' but Nepali authorities are aware of their presence in Nepal as well as their recent history of persecution in Myanmar. Nevertheless, Nepal cannot economically support the Rohingyas unless international agencies help. Nepal's economy has not yet fully recovered from the 2015 earthquake which costed the country about $10 billion. The situation has certainly become worse during the pandemic.

Until December 2015, UNHCR Nepal had provided monthly allowances to Rohingyas. It gave Rs 5,750 (1,465 Baht) to male and Rs 3,330 (850 Baht) to female. In addition, Rs 2,700 (688 Baht) was allocated for children. Only those who came to Nepal prior to 2013 were eligible to receive the allowance. Occasionally, some Nepali local NGOs provide them with food-related and other types of assistance. NGOs have limited scopes and their role may not always be appreciated. I remember an incident that occurred a day before I left Nepal. I had a plan to visit the Rohingya settlement but I was suggested not to show up anytime soon because a Rohingya man had apparently got into a scuffle with a Nepali man the other day because of which the community wanted to keep a low profile for a while. 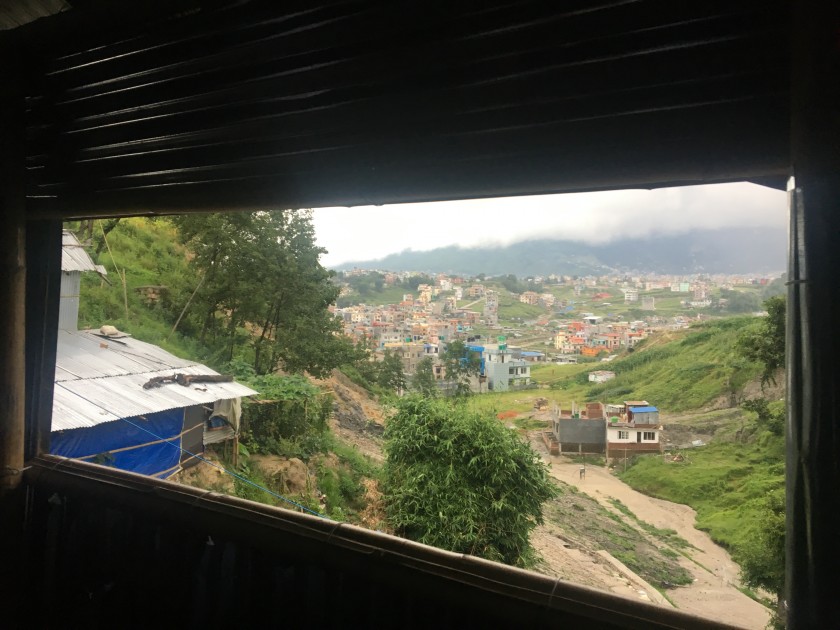 A neighborhood viewed from the Rohingya settlement

Compared to Bhutanese and Tibetan refugees, Rohingya refugees in Nepal have not got much attention. The Bhutanese refugees are all ethnically and culturally Nepalis but were previously citizens of Bhutan. The Tibetan refugees have similar cultural and religious affinities with sections of Nepali population. While both these groups suffered persecution back in their countries, they managed to adapt themselves well in Nepal because of their familiar cultural and religious background. Like Bhutanese and Tibetans, Rohingyas have a history of persecution too. But as Muslims from Myanmar, they are culturally and religiously different than the host population. Hence, this could create challenges for them when it comes to adapting to the local ways of life.

A Rohingya man in Kathmandu said, "I think Nepal government will let us live here as long as we don't make any trouble." In Nepal, there is not any strong anti-Rohingya sentiment thus far, even though some critical observations on Rohingya situation have appeared in the local media in the recent past. In Southeast Asia, anti-Rohingya sentiments are increasingly visible in social media particularly since the onset of 2015 Rohingya boat crisis when a large number of Rohingyas began fleeing the Rakhine state.

To those who express their worries about the plight of Rohingyas, critics often retort, "If you worry about Rohingyas, why don't you take them to your home?" Nobody becomes refugees by choice just like nobody is born citizen of a country by choice. Governments around the world should urgently co-ordinate and make collective efforts to address the concerns and issues of Rohingyas. In the absence of collective responsibility, the refugee problem will always be 'theirs' problem and not 'ours'. A sincere commitment to humanitarian principles by all state and non-state actors around the world can ameliorate the conditions of refugees and restore their respect and dignity as human beings.