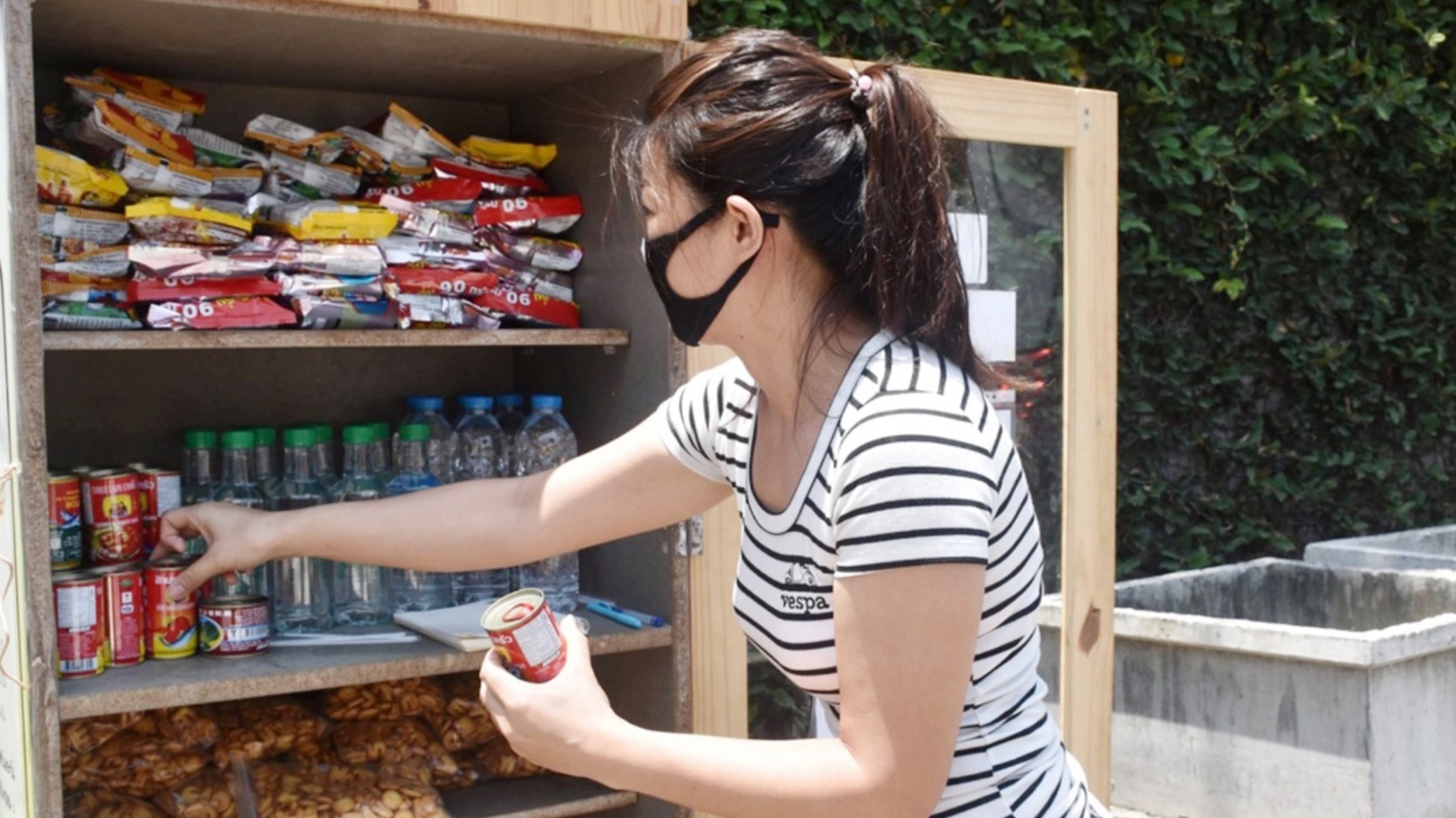 Thailand is one of the countries that can successfully deal with pandemic Covid-19. On May 24, 2020, there was no new infected or dead case. However, many poor people are affected by the lockdown campaign as we found in many countries around the world. Interestingly, the project of Happy Sharing Pantry or “Tuu Pan Suk” has been initiated by people aiming to establish some boxes to share some food for the needy. Nowadays, there are +618 boxes in every area throughout Thailand.

This particular project can be seen even in Europe and America. It is called “Little Free Pantry.” However, the purpose of this box is different. Though the developed countries already provide a lot of welfare for people such as, good education, public health, and some levels of stability in the carrier, some people still want to be homeless, called “voluntary homeless.” Therefore, those boxes can facilitate their lives. Indeed, helping others can also be viewed as helping oneself, meaning that giving the poor some food can prevent them from stealing or destroying the rich houses. The conflict based on social status can be partially solved by this kind of sharing activity. Nonetheless, in developing countries, that box signifies the failed management of the government until people must help themselves because the government’s policy cannot support them.

The function of Sharing Boxes is to avoid face-to-face giving, because someone may feel shy when he receives something from other people. By this box, the giver can put whatever he wants to share, while the receiver can take whatever without gazing. This is often found in secular countries. The purpose of giving is purely to share, without hoping anything in return, not even to take a photo of the recipient.

Sharing is behavior that can often be seen in the name of religion. If we look at Facebook Pages or websites of religious organizations, we always see their social activity, by sharing some material objects to the poor people. Of course, there is nothing wrong with that. In addition, someone may want to join or donate his materials to support the poor as well after he sees those photos.

The case study from Thailand is interesting. Someone recorded a video of people taking some food from the box, which was provided by him and then posted on his Facebook. Two kinds of opinions from those videos can be seen. First, if the poor took some food and paid respect to the box (Wai in Thai), commentators would say that he is a moral one, should be appreciated. In contrast, if the poor took a lot, he would be blamed that he is greedy, which is corresponded to the Buddhist idea, he is poor because he was greedy in his previous life.

In so doing, the Sharing Box seems to become a moral criteria tool to check the morality of the poor people. Notably, Buddhists in Thailand also have expectations if they give to the poor, meaning that the poor should receive as much as one person can consume, or they should use it in the way that the donor wants. It means that if the poor take some food and sell for exchanging money (because in many cases, they have to pay for renting houses), it is unacceptable. Because this kind of sharing is done with the aim of controlling the poor people’s life. Giving is not just a giving.

Ironically, we seem to be neutral when we give to the people who are in the higher class of social status, the monarchy family members, and monks for example. We just give it, and it is up to the higher class receivers to use it in their personal ways. Sometimes, people know that a room of temples is full of many sets of Sanghadana (material objects given to the monks) because no one uses it, but people still want to give without saying that Bhante should use it in such and such ways.

During an economic crisis, sharing is really important and should be done. Religious organizations can also be a good example of donors. However, the idea of religion should be applied. In Christianity, Jesus said that

Similarly, Dana in Buddhism is based on the concept of Punna or merits. The highest level of merits is to give without hoping something in return.  Merits or Punna means to clean up greedy, hated, and ignorance. Therefore, giving something in order to get another thing is not the way to clean the mind, though it is a moral act. Buddha always separated his teaching into 2 levels; Sasava (impure morality) and Anasava (pure morality), (Mahacattarisaka Sutta in Majjhimanikaya).  In this regard, religious teachings are important to remind us (the believers) when we do everything including when we are helping other people.

Nonetheless, though an act of giving or sharing is a good thing especially during the economic crisis, it should be done by people themselves, while the government’s policy should go further by initiating the welfare system to stabilize the well-being of all people, not for bureaucrats only. That is because, in every situation, the help from the government is the “rights” that people deserve, not a gift in the name of merit-making or compassion that the state provides to the poor.