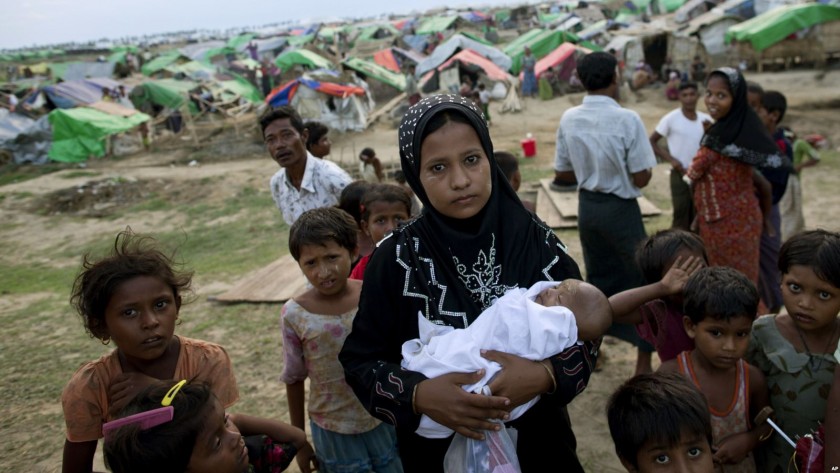 The Rohingya refugee problem has been a longstanding issue and involves the question of an ethnic minority’s identity. The Rohingyas are an ethnic minority group in the northern Arakan (currently Rakhine) state of Myanmar. Farzana documented their lives as a marginalised group of refugees living in Bangladesh by the Naff river, which flows through Myanmar to Bangladesh. This border area is significant for several reasons. First, it is the meet-point of two political regions- South Asia and South-East Asia. It has political significance for the neighbouring states because this area acts as a boundary to both of each state and very closely linked in its national security. Moreover, it has social significance to the people who live along both sides of the Naff river.

The are two main arguments in this thesis: firstly, Rohingya identity regarding place has been revealed through their collective and personal memories; secondly, the exile life creates a symbolic language that contribute to their identity construction consciously and unconsciously. The evidence for these arguments are shown in chapter 5, 6, and 7 as well. Chapter 5 is about memories of Rohingya that they face socio-economic deprivation and political pressure in Arakan and these are the reason for their forced migration. Chapter 6 talks about present everyday Rohingya lives in refugee camp that are strictly controlled by the authority. In Chapter 7, there are evidences of the Rohingya’s informal cultural lives, vision, belief, past and future life captured in their music and art. The purpose of this chapter is to analyse Rohingya arts and artefacts as textual clues to understand how the refugee community continues to nurture their identity in the borderland, and also to learn how the Rohingyas use these materials.

Everyday life history of Rohingya people can be found in their camp life experiences and the self-identity are also hidden in it. Differences in people such as gender and age can be factors of having different experiences and it resulted in multiple perspective to the identity and self-realization. Moreover, it is not surprising at all that the Rohingya community also try to maintain their cultural life even while living in the refugee camp as any community would do. This cultural life is shown in many things in their everyday life such as folk songs, poetry, playwriting, arts, painting and artefacts and these things are very important for their survival in the camp.

All of these example of folk tradition are the natural expressions of their mind and self because they are the true creator, the normal people not the professional. Most of the time, outsider might perceive this as naive art, self-taught and working class art. But most importantly, in this art, they truly depict their lives, cultural identity, shared community and collective values and it serve a purpose of maintaining their mindset and their view to the world that they are passing it down to the younger generation. The Rohingya culture is very rich in folk art that effectively voice out their daily life, despair, hope, anger and also full of resistance and life prospects to the future. All in all, the researcher believes that with systematic exploration of the symbolic meanings in these folk arts, it can help reconstruct their socio-political identity.

In this study, the researcher collect data from conducting fieldwork in 2009 to 2010 with Rohingya refugee in several cities of Teknaf, the south-eastern corner of Bangladesh connecting to Burma. In-depth interviews with refugee were conducted to learn about their personal stories, thoughts, feelings and their interpretation and process in Burma and present life in Bangladesh. Moreover, the researcher used participant observation when she finds an unexpected event during the interview. This kinds observation allows her to see several informal or non-conventional aspect of the refugee life including the music and drawing of the refugee.

These unconventional documents that she collected during her fieldwork includes text, record of  the refugee experience are taken as a powerful means of social resistance. It was found that Rohingya tried to employ these unconventional mode of communication as they try to be expressive and create helpful narration of their collective sense of self and culture.

Reconstructions of Forced Migration: The role of Social Memory

The researcher conceptualises forced migration by addressing the theoretical debate on citizenship, multiculturalism, Burma’s ethnicity and ethnic policy. It was found that citizenship is a mechanism that the authority use to build national identity through the ideology of nationalism. Citizenship is used as a mean to include and exclude the country inhabitants. It can perfectly be implied as inclusion-exclusion process. However, multiculturalism are often incorporated into a great pluralism system but in this case, extreme intolerance has been evident. As the goal is to achieve a pure homogenous identity, the parochial exclusivism is against the Rohingya. Many measures have been carried out in accordance to his idea; genocide, ethnic cleansing, and expulsion or forced migration.

It is clear that Burmese government has used unitary assimilation policy to form national identity. They used forces migration against many ethnic groups that has been creating refugee problem in neighbouring countries; Thailand, China, India and Bangladesh. Rohingya is among one of ethnic groups who face forced migration while claiming that they do belong to the Burma with history evidence. However, the government always deny those historic evidence. Therefore, it is interesting how the Rohingya construct and portray their identity when they are forced to be refugee in foreign countries.

This analytical framework is employed by the researcher. The framework is made up of three analysis tools in three topic; social memory, camp life experience and music and arts.

Social memory that was studied was told and not in the written records at all. The members of this collective social memory told their stories and could tell their past and the presence. This unwritten form of social memory or in oral form shows a very important point that it is personal to the informants. It is a powerful tool that help the researcher interpret the social reality and it strongly shapes the identity of this group. It is not uncommon to find shared social memory among this group because several researchers have found that many group experienced traumatic event often have unwritten social memory. Moreover, community of Rohingya refugee is mainly non-literate, therefore the main social memory that they have are in oral forms. The people can still remember and tell about their rituals, their familiar places, name of their friend, songs, stories, events and their personal experience. They also vividly tell the future generation about their experience so that it will be passed down. This is their process of constructing socio-political history and incorporating this aspect into academic work would add much value to the work.

Life in Refugee Camps: An analysis of everyday life politics and worldview

The finding of this study is that refugee might adopt the forced migration for the reason that they want to preserve their identity. They try to not lose their identity through compromising and assimilation. The community they have in the home country could still remain without a formal identity while being displaced from their home. It also has been shown that they can maintain their original identity in their memories and cultural means. It is evident that this type of community is not voiceless or non-existent. There can be a community like this.

The researcher believes that this research has made a contribution in trying to understand people’s perspective by using ethnographic approach. It can benefit to understand Rohingya refugees’ lives and their identity construction. This research shows how important it is to bring and study voices of the refugee and their memories into political discourse and institutional process.

It is the ultimate role of this research to communicate Rohingya identity and to portray unconventional form of resistance to discrimination and oppression. Rohingya express their identity and maintain their memory through their music and art  and with this tool, they are also able to pass down their history to the younger generation. They also use there tools to express their identity to the outsiders. Their music and art can be taken as a tool to protest while it is also the everyday form of local resistance. However, it is very important to notice that the Rohingya do not have a large variety of choice before them, music and art are one of few tools they can use to protest. By this study, the goal is to give a better understanding of everyday life and complex reality and also to challenge the definition of resistance in order to recognise the less conventional form of resistance.

Kazi Fahmida Farzana is Senior Lecturer in the Department of International Affairs at the University Utara Malaysia, Malaysia.