Tong Chee Kiong is a scholar majoring in Anthropological Linguistics, Historical Anthropology and Cultural Anthropology. In this book, the author followed the sociological question: “whether the different ethnic compositions and the different trajectory of the population, result in different conceptions of Chinese identity?” To a more basic level, the author asked: who and what is a Chinese?

The author examined the nature and process of ethnic relations and interactions between the members of the host countries and the Chinese population in these countries; he also re-examined the major hypotheses regarding ethnic relations in Southeast Asia. Furthermore, he argued that “assimilation, integration, and acculturation” did not capture the complexities of ethnic identity and relations in Southeast Asia. So he developed new conceptual models and theory ideas about it. i.e. “center-periphery identity”; “ethno-racialization”. The author also discussed how did Chinese community maintain their group identity and react, adapt and strategize their identity in relations to political and national policies. 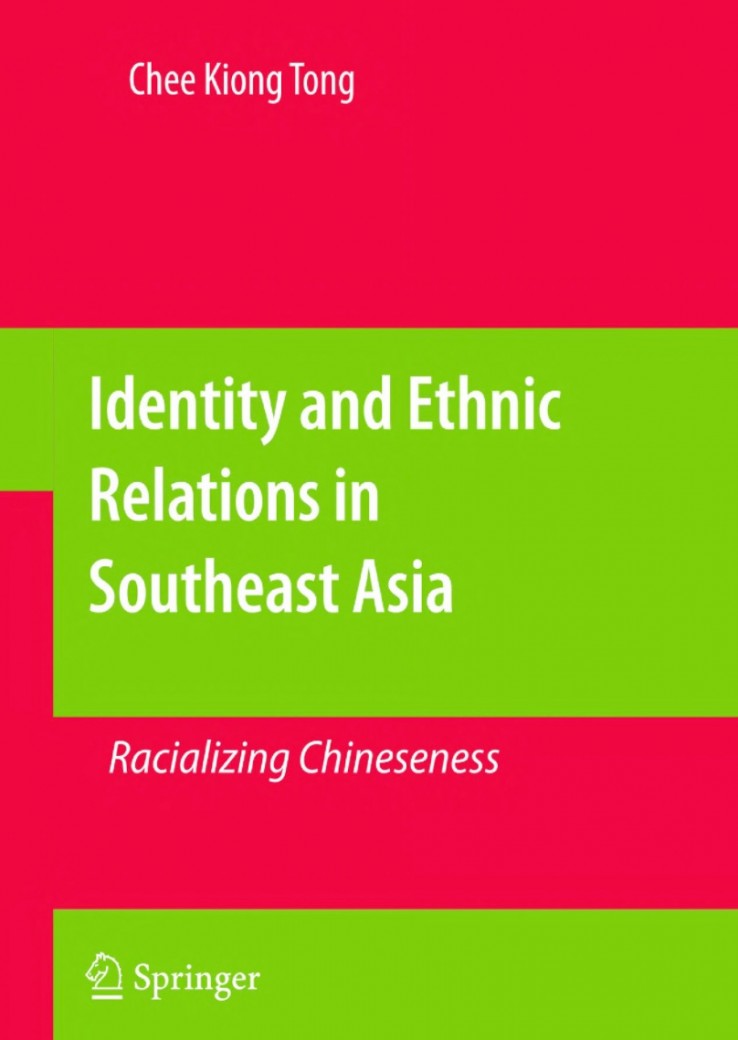 Rethinking assimilation and Chineseness in Thailand

In this chapter, the author delineated the history, perception, expansion, character, discriminatory policies of Chinese immigrants in Siam since A.D. 650, Tang dynasty in China. Chinese immigrants were defined as “the other” as the history development. Naturally, a corresponding discriminatory policies were conducted, and reached peakunder the government of PhibunSongkhram in 1938-1945 from cultural, political and especially economic and educational aspects. However, all these discrimination forced secret society in Chinese community which developed into all kinds of legitimate associations later on. They played significant role in maintaining bilingual and bicultural education, religion and tradition. And also the ethnic intermarriage also accelerates integration while which is not so encouraged.

The author claimed that assimilation (at least Skinner’s way of defining assimilation) has not taken place in Thailand. The situation is more complex and nuanced. Especially under the background of the Rise of China, there is some “renewed interest in China” and “increasing consciousness of their Chineseness”. He argued that Chinese in Thailand maintained a “core ethnic identity” which is primordial, affirm and serves to resist the forces of assimilation. And at the periphery, they can have “double identity” like Coughlin proposed. It is more instrumental.

Singapore: one face, many masks

Singapore is special case with its majority popular of Chinese, almost 80%. Since early nineteenth century, Chinese in Kwangtung and Fukien migrated to Singapore and became mainly middlemen for British tea traders. As a result of colonialism, education in Singapore was divided into two kinds, Chinese and English, each educated people having negative stereotypes of the other. And they also have “voluntary associations” which not only “self-help” but also provide mutual aid to a larger community.

In Singapore, different group people settle down in different area. And they keep different religions. From generation to generation, nationalism was growing. In 1965, self-government was achieved in Singapore. Yet, it is still cross-divided by dialect, regional, and generations. For the first-generation, they can define themselves as Chinese without even think about it because place, locality and community can easily answer the “non-question” to them, “who is a Chinese?” However, for the younger generation, they are coping with their state discourse in their own ways with ambivalent feelings and self-contradictions, which made the ethnicity in Singapore a flux one.

Finally, the author argued that in Singapore, territoriality, language and religion are no longer the makers of ethnicity but part of a contested discourse in defining identity, though the core features of ethnic identity became bloodline and lineage, which formed a sense of exclusion and exclusiveness that provide strong bonds holding “Chinese community”. The author also illustrated that there was a disembedding of the self from mainland China and a disembedding from the local community in Singapore. Identity in Singapore became more individual, “subjectivized”, as the author said. They will immense liberty in classifying their sameness and differentness in the arena of the Chinese diaspora.

The Chinese in Malaysia, Indonesia, Philippine

Chinese takes a major population in Malaysia, either. Over 26% (started at 1400). Yet, they didn’t live in a dominant position because of strong colonial government. British range and rearranged the balance between Malays and other alien groups; Japanese conducted massacre and discrimination against Chinese, and pro-Malay policy; Federation of Malay also regrouped population during communist insurgents period 1948-1960; After independence, there was a multi-racial co-operation to be expedited, while New Economic Policy which was to eradicate poverty and to correct the economic imbalances increased the Malay share of corporate equality. All these top-level policies contributed to a pluralistic ethnic environment.

In Malaysia, the core identity of ethnicity is “blood”, which is non-negotiablewhile other traditional markers like language, education lost their homogeneity in defining an ethnic group. That means cultural attributes become negotiable. There is a greater degree of freedom, heterogeneity, and fluidity. However, religion and food became ethnic markers because of the strong sense of Muslim from national policies, which is from the macro-level. In Malaysia, micro-level also need to be considered. As filed work showed, Chinese ethnicity in Malay negotiate everyday life, adopting various strategies in the process of living and surviving, reproduced and produced advantages and adoptions. The everyday interactions between the Chinese and Malays do not simple reflect the political and economic relations of conflict and competition between the two groups.

In Indonesia, the colonial government is Dutch, and it was also occupied by Japan. The history is bloodier, Chinese are continuously being targeted and always as scapegoats whenever there are problems. Thousands Chinese people got killed during several affairs which conducted by Japanese and Indonesians. Discrimination is still strong today.

As explanation, the author argued that the reason for long-term discrimination is multi-faceted, taking economic, political and cultural variables into consideration. Chinese in Indonesia hold Multiple Chineseness, they can be divided into three groups: first, the more culturally Chinese-oriented totok who speak Mandarin and other dialects regularly; second, the extremely diverse peranakans who generally speak Bahasa Indonesia or their own local languages and who have acculturated at different rates depending on regional variation; and third, the Indonesia-oriented group who do not speak Chinese at all and who identify themselves solely as Indonesian. In Indonesia, ethnicity is as discourse which situated Chinese in different social positions which oriented by different socio-economic, cultural and religious status. For the multidimensional forces, the author proposed four of them: the role of the state and nation-building processes; global influences; the individual’s and communities’ responses towards state policies; and the institutional and environmental factors that prevail in the country. And he also pointed that there is an imagined community in “economic ethnicity” which based on the fundamental Guanxi which facilitate economic survival.

Chinese in Philippine got the similar result in under Spanish colonial era. They grown rapidly and they got massacred. They became indispensable in the local economic system, and they got massacred again just because the ruler afraid they would be less loyal with their Chinese root. So they just made one “new” group with same religious faith that would more loyal to them while, blood tie still works as the basic character and primordial of values central to Chineseness. And other markers, like language, values, and religions are also put into play as variable. Especially Chinese education, not like in Indonesia or Singapore, got great emphasis from Chinese in Philippine because there is a strong link between learning Chinese and perpetuating Chinese culture and Chineseness in terms of group identification.

The Chinese in Burma and Vietnam

In Burma, situation is different because China invaded in Burma in the early time and left a lot KMT members. So the way they construct identity is not ascriptive but constructive by making a sense of inter-ethnic boundary and also intra-ethnic difference.The process of constructing inter-group boundary from out-group reflects a heavy reliance on ascribed attributes, specially “blood, ancestral ties and bloodline” which is the primary marker. There is still secondary marker for inter-group identification, like Chinese language, customs and rituals. Furthermore, there is a dichotomous conceptualization of “leto” and “letshe” in Burma to differentiate intra-ethnic groups in Chinese society in Burma, which present three prominent ethnic Chinese dialects groups: the Hokkiens, Yunnanese and Cantonese. Conceptually, the basis of ethnicity and ethnic identity has commonly been presented in terms of a binary opposition between ascriptive identity and instrumental identity which means cultural content of Chinese identity is negotiable and variable.

There is a war history between China and Vietnam, too. Most of the history, Vietnam was under control of China. While not like Burma, the relationship is friendly, it’s love and hate, between Chinese and Vietnamese in Vietnam. Ethnic discrimination is also different from the case in Indonesia which is in a very high degree. It is less obvious.

Chinese identity in Vietnam is evident both from primordialist and situationists’ point of view. Because physical appearance is similar between Chinese and Vietmese, they go for bloodline to keep their identity. Language is also another important marker. And they see marriage as a method to keep Chinese purity and then intermarriage was resisted. And they also developed a mechanism to maintain Chinese identity as social capital, which is presented as xinyong—personalism and Guanxi—interpersonal relationship.