In Killing with Kindness, Mark Schuller provides an ethnographic account of nongovernmental politics in Haiti, a country many now dub “the Republic of NGOs.”

Schuller challenges the central concept in the world of international aid and development by providing a nuanced understanding of the workings of two different NGOs, one that is organized hierarchically and beholden to its donors (primarily the US Agency for International Development) and one that strives to be more egalitarian (although it does not always succeed) and has considerably more autonomy from its (European) donors in determining projects and programs.

Schuller reflecting on the politics of international aid largely centers on the role of USAID and provides an interesting account of the history and structure of the organization, as well as some of its leading competitors such as the Global Fund. In order to track the political interests that are bound up with foreign aid, Schuller examines the social life of two policies: abstinence promotion and results-based contracting. He then outlines an approach to power and inequality in the world system attuned to the effects of neoliberal governmentality, or what he calls “trickle-down imperialism.” In a brief afterword, Schuller offers a set of concrete policy suggestions aimed at grassroots and community organizations, in which he situates development as a human right. 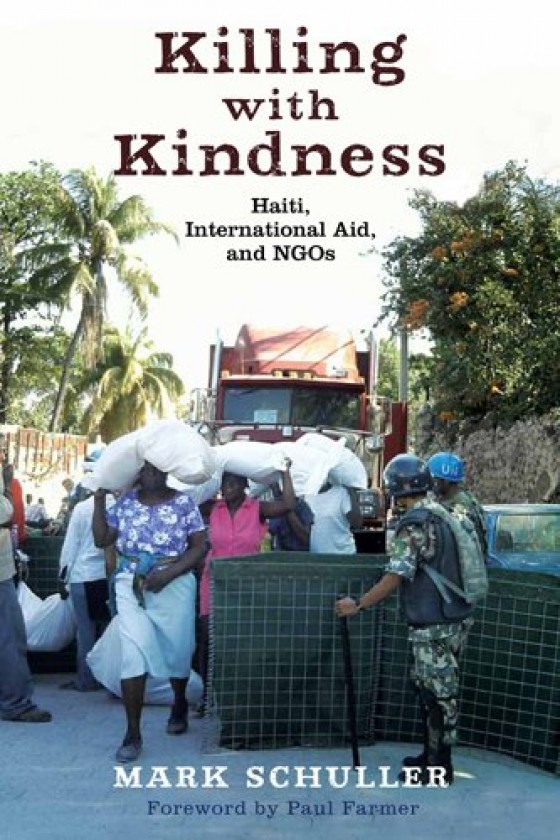 The research draws on World system theory: to describe how the contemporary world system today has continually applied pressure in the ‘underdeveloped’ country, draining its resources and forcing it into a debt bondage that kept it from developing- contributing to the very surplus that allowed the ‘west’ to develop.

Post development theory: to describe how development discourse hides the political stakes and inequalities recasting them as technical failures (as in an ‘Anti-politics machine’) Draws on Escobar’s inquiry on the discourse itself and who it reifies national difference, freezing the underdeveloped in an subordinate position. He also relies on critical stances on development has since appeared documenting abuses, inequalities, failures, environmental degradation and injustices of the development apparatus.

He refers to Marx’s theory of class and inequality as well as neo-Marxist idea of capitalism and also relies on Foucault’s idea of governmentality and discipline. However, he states that the system of aid is neither as rational and visible as Weber or Marx nor is individuating and diffused as Michel Foucault outlined.

Pierre Bourdieu habitus, social field practice of everyday life are employed by Schuller to explain the workings of the two NGOs

Paul Farmer’s concept of structural violence: the natural expression of a political and economic order that seems as old as slavery. This social web of exploitation in its many different historical forms has long been global. It tightens a physical noose around victims’s neck and garroting determines the way in which resources food medicine even affection ae allocated. Like most ideological system and oppression structural violence depends on is invisibility the erasure of historical memory, is central to understanding the argument of the book.

The book also draws on Appadurai’s concept that all products of human actions and decision, policies have a social life.

The ethnographic study was based in Kriswa, Haiti in a mixed income neighborhoods with sizable middle class during 20 months from October 2003 to May 2005 and enhanced by research conducted after the 2010 earthquake. 120 interviews form peasant to factory workers to donor representatives etc were conducted and supplemented by 4200 news stories, and a meticulous study of the everyday working and assessment of two NGOs: Sove Lavi (USAID funds) and Fanm tet Ansanm ( Private NGO Funds). Units of analysis is modes of the interaction within the civic infrastructure.

The study challenges binary often utilizing civil society and globalization and instead offers a tripartite analysis that tracks and theorizes multiple set of actors: transnational agencies, the state and the local community. The study illustrtes ways in which NGOs can be evaluated and their impact in the global south (new term that has replaced underdeveloped or the third world country) be assessed. It explores if NGOs democratize development, being closer to the people they serve and offering a better system of governance as some believe or are the NGOs a tool of imperialism, a gentle invasion of the south by the north as others assert. And on what base can one make and evaluate these claims?

The study studies how constituencies like donor groups wield subtle but nonetheless effective influence on the NGOs and their target populations. It explores the role development aid and agencies administering that aid pay in transforming local civic life; where this power has real material consequences.

With a slight breakaway or improvisation of the dominant contemporary Foucauldian view in the post developmental studies, Schuller grafts Foucault’s technics of power with Marxist world system analysis to come up with what he calls trickle-down imperialism.

The views in the research fits well with the dominant paradigm in anthropological studies of emergency, where many theorists see humanitarianism itself as a key discourse that both conceals and congeals global inequalities.

Over the last few decades, NGOs have become a central part of global governance as the vast majority of international aid is distributed through them. The international community has used private NGOs to bypass states, channeling vast amounts of aid directly into organizations staffed and directed by foreigners.

There were an estimated 10,000 NGOs working in Haiti at the time of the research. It would mean that Haiti has the highest density of NGOs per capita in the world. NGOs were much elusive than the government and had escaped criticism before the earthquake. They had attracted wide range of responses from the scholars and development practitioners, many of whom argued development has failed but had hope the NGOs may fix the problem and also that the NGOS gave voice to the marginalized community like the women and ‘the poor’.

NGOs are intermediaries of the contemporary global system which reproduces inequality, class differences and stratification passed from the donors to the recipient state. Neoliberal globalization like imperialism, colonism and the slavery before it, needs intermediaries; local people selected to receive some of the benefits of the system of exploitation, inequality and exclusion who therefore identify with foreign interest. (p 179) They are the semi elite that enable the rule of the capitalist class.  This role of the NGOs is what following Howard Zinn, Schuller refers to NGOs as the “guards of the system” that play a crucial role in “gluing” globalization and reproducing the world system. NGOs as semi-elites are inheritors of past world system and pillars of contemporary globalizations; an elusive tool to fulfil donors vested interest as well as to empower and promote a wide range of private neoliberal capitalist interests

Mark Schuller is Associate Professor of Anthropology and NGO Leadership and Development at Northern Illinois University and affiliate at the Faculté d’Ethnologie, l’Université d’État d’Haïti. Supported by the National Science Foundation Senior and CAREER Grant, Bellagio Center, and others, Schuller’s work has been recognized by peers, including the Margaret Mead Award. His research on NGOs, globalization, disasters, and gender in Haiti has been published in two dozen book chapters and peer-reviewed articles as well as public media. He is the author of two monographs, including Killing with Kindness published in 2012 based on his PhD dissertation of 2007.