TCIJ studied relevant documents and found that the Kra isthmus project started around Ayutthaya era in 1677 during the reign of King Narai. A French engineer was assigned to examine topography and suggested the adjustment of natural waterway in order to connect with Tanintharyi and Myeik. This was the first proposal to build waterway to connect two regional oceans in southern Thailand. Later, England, France and Japan also attempted to propose the Kra isthmus project during the era of colonialism before Siam political revolution in 1932. Besides the budget and practicality issue, the concern of losing territory and secession also deterred this project.

[oeFurthermore, politicians in and out of power often proposed the Kra isthmus project to gain popularity, for example; Pridi Panomyong, Lieutenant General Han Leelanon, Samak Sundaravej and General Chavalit Yongchaiyudh. Several houses of parliament and senates have conducted a number of studies. Not long afterward, things were quiet and were brought back again repeatedly like that. 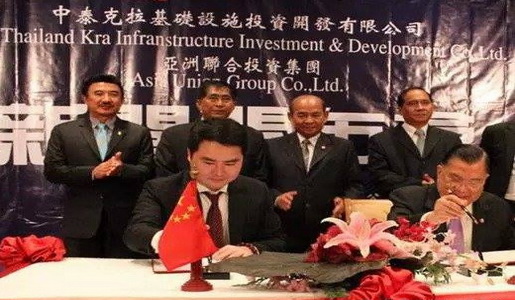 The picture which a number of online news websites claimed that General Chavalit Yonchaiyudh
signed MOU on cooperation for China-Thailand Kra Infrastructure Investment & Development
in Guangzhou on May, 15, 2015

Recently in 2015, the Kra Isthmus Project was raised after reports by online news agencies indicating that MOU was signed by Thailand and China on May, 15, 2015 to re-study the Kra project in Guangzhou, China. The picture of General Chavalit Yongchaiyudh, the former PM, was widespread on social media. Later, China Foreign Ministry Spokesperson have made an official statement to deny the participation of Chinese government with the MOU while Thai ambassador to Beijing and commercial attaché also states that Thai government has nothing to do with the MOU as well. Subsequently, General Chavalit Yongchaiyudh himself announced to deny his participation with this MOU.

Assoc.Prof.Dr. Satapon Keovimol, faculty of Engineering, King Mongkut’s University of Technology North Bangkok who is an Executive Advisory Committee on Feasibility Study of the Kra Isthmus (Thai Canal Project) stated that the Kra Isthmus project has always had different proposals until now. There are 12 routes considering several aspects; the autonomy in canal management in Thailand, economy, military strategy, social and environment impact and engineering, etc. 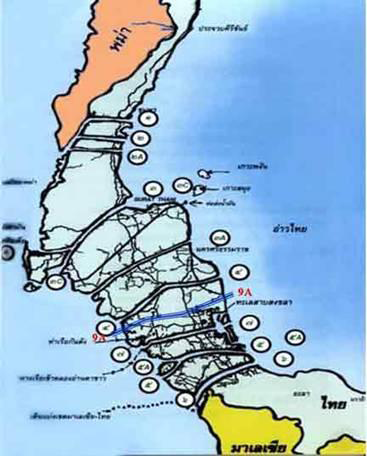 Among officially recorded proposals by credible organizations from 1973-2005, the most practical proposal is Model 5A (from the study by TAMS Company) and Model 9A (from the study by Executive Advisory Committee on Feasibility Study of the Kra Isthmus (Thai Canal Project) Group of senate assembly 2001 finished in 2005)

Model 5A from the Study of TAMS company

When the Kra Isthmus project was raised in the past, several governments often referred to the study of Tippetts-Abbett-McCarthy-Stratton or TAMS. The study is considered to be the first most systematic study of the Kra isthmus in Thailand (probably up to present), which was presented to the government in 1973.  TAMS has suggested 10 models with 5A as the most practical model. Model 5A was the proposal for construction of one canal with depth of 33.5 m, width of 490 m and length of 107 km allowing the passage of 500,000 ton (or 250,000 ton) ship. The construction method is conventional digging and nuclear for some parts. Port and industry could be set up at the estuary. It could be a hub for transferring goods in the region while an estimate of budget is $22,480 million (with the value of money at that time). Afterwards, office of National Economic and Social Development Board examined this study and re-estimated the budget in 1998 to be approximately between 500,000-810,000 million baht (with the value of money at that time). Map of the Kra Isthmus Project by TAMS (From: Report on the Feasibility Study on the Kra Canal : Commercial and Physical Aspect. Part 1: Physical Aspect, Sucharit Koontanakulvong, 1999)

Comparison Chart of the Kra Isthmus project by TAMS (From: Report on the Feasibility Study on the Kra Canal : Commercial and Physical Aspect. Part 1: Physical Aspect, Sucharit Koontanakulvong, 1999) 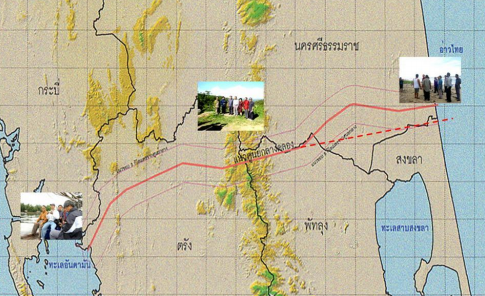 Model 9A from the Feasibility Study on the Kra Isthmus Project (Thai Canal)
by Executive Advisory Committees, Senate Assembly of 2000 (Report published in 2005)

Thai canal route (Model 9A) through Krabi, Trang, Phattalung, Nakhon Si Thammarat and Songkhla Province was to connect Andaman Sea with the Gulf of Thailand with the length of 120 km, depth of 35-40 m. Two parallel canals would be constructed for two ways of transportation. The width would be around 300-350 m and the width of returning point would be 500 m. Model 9A would be constructed through Kuan Kreng swamp forest which can reduce the concussion of high waves from the ship theoretically. The principle and reason for constructing two canals is to support 500,000 ton ship which mostly are oil tanker ship (60-80 meters in width and 30-35 meters in depth). By this method of construction, it can allow deep-water ship to go through. Also, if the ship is accidentally broken in one canal, another canal could still be shared.

The budget of Thai canal project for soil transportation of 4,000 million m3 is 600,000 million baht and for constructing three bridges and two tunnels is 50,000 million baht. The majority of money to facilitate construction is Thai baht used in Thailand, for example, labor cost, material (rock, cement, steel). 70 percent of these materials could be produced in Thailand while the remaining material like fuel and machinery could be traded with US dollar. Therefore, the money would be circulated within the country. The estimate of budget is 650,000 million baht.

For Thai canal construction, 120 companies with modern machinery would be selected for constructing canal of 120 km. One kilometer would be constructed by each company with the budget of 5,000 million Thai baht for each kilometer. The construction would be started at the same time and would take five years time. However, there must be an excellent management system to ensure the same standard for every kilometer.

The Controversy of the Kra Isthmus Project

If the Kra Isthmus project is successful, it seemed to be considerably beneficial to China because it saves time to transport oil from Middle East to China. Oil tanker ship would be the most frequent user of this route while other countries would only be benefited by cutting one to two days off the shipping.

Travelling through Kra isthmus route could save one to two days from bypassing Malay Peninsula comparing to Suez and Panama canal which could cut off 10,000 km or seven days. Concerning the cost of maritime shipping, ships would have to reduce the speed from 15 knots (27 km/h) to 12 knots (21 km/h). So, the saved time is reduced by the speed reduction. Besides, most ship would have to change from fuel oil to diesel while travelling through canal. Consequently, the cost for fuel would be doubled.

There are some downsides of Model 5A and 9A. For Model 5A, the downsides are 1. It is close to Malaysia border and it encourages Malaysia to develop the industry without the contribution for investment in canal construction. So, it could benefit Malaysia more than Thailand for the canal would be close to Alor Setar and central port of Malaysia (Port Kelang) 2. The density of population is high, so the cost for relocation is high. 3. The canal cut through Songkhla Lake (lower Songkhla Lake) and this could trigger a substantial resistance, just as the case of Thailand-Malaysia gas pipeline project. 4. Considering information from topography study, 11 underground stone cavities were found in Satun. 5. The canal is near Strait of Malacca which will not help shorten the sail and 6. There is not enough space for continuous economy and industry development.

For Model 9A, the downsides are 1. Model 9A is 128 km long and Model 2 is 92 km long. Model 5A is 182 km while Model 7A is 185 km long. 2. The construction has to cut through 18 km of Nakhon SI Thammarat mountain range. 3. The construction has to cut through Kuan Kreng swamp forest which needed to be managed carefully to avoid environmental problem and 4. In order to build the coastal port, Kuan Kreng swamp forest would have to be partly developed as Port of Kreng to avoid monsoon in the Gulf of Thailand.

From the report “Environmental Impact from the Kra Canal” by applied psychology program students in administration class of 92, group 4 which presented to Applied Psychology Institute, National Defence Studies Institute, Royal Thai Armed Forces Headquarters in 2003 and report on the Feasibility study on the Kra Canal: commercial and physical aspects, part 3 : environmental study by Piamsak Menasvet, Pipat Patanaponpaiboon, Sompop Rungsupa and Arnupap Panichpol in 1999, interesting environmental impact are as followed.

The construction of Model 5A and 9A would not cut through area where it is home to a large number of people, so there would a large case of expropriation and relocation. It can also affect the important environment such as the water masses circulation in the Gulf of Thailand with Andaman Sea, saltwater encroachment into mainland, effect of sedimentation from canal construction, destruction of coral reef, algae and seagrass, mangrove forest intrusion, etc. The scale of these problems depends on the route of each model. However, the most-discussed Model 5A might afftect the hydrological system of Songkhla Lake while Model 9A might impact tourism industry of Andaman Sea, seagrass communities, dugong habitat and Pakpanang watershed.

If Model 5A was used for the Kra isthmus project, there would be hydrogeology impact in the area. Volume and quality of groundwater system would be affected because saltwater would flow into the level of groundwater. There would also be impact on geology as the canal is constructed on the fault line and this could end in destruction. The rock and sediment accumulation would be rapidly increased in the canal and water could infiltrate into the fault lines. Consequently, the fault line might move. For biological impact, Model 5A might increase salinity of Songkhla Lake and could change the ecology of aquatic animals in the area. The increased salinity might result in extinction among some aquatic animals.

Every Model and route would result in coastal impacts to Gulf of Thailand and Andaman Sea, Adang islands. The ecosystem would change as a result of sediments from canal construction. The water would be more turbid and could damage coral reef meaning there would be less habitat for aquatic animals. Sand beaches might turn into mud beaches and affect the ecosystem on the mainland. Model 5A would be constructed through seven national reserved forests and affect ecosystem relationship. Terrestrial forest and tropical rain forest might be turn into peat swamp forest or Melaleuca forest. Moreover, Mangrove forest which usually occurred around the coastal and estuary area might receive some impact as well.

The tremendous impact on the people has been shown and this project can be taken as a megaproject which will make the largest impact after the constitution of year 1997. In the trend of democracy and borderless media, people learned to be more aware of their rights and local resources. They would not tolerate the damage of the project regardless of the scale and whether it is run by private or government sector. There has been resistance in several issues from Northern to Southern Thailand. Example can be drawn from thermal power plant in Prachuab Khiri Khan Province which has been opposed from 1997. The latest example from 2015 is the resistance of coal-fired power plant in Krabi. Consequently, the Kra Isthmus Project would probably encounter a massive resistance as well.