The following is the current investment of SSO in Bangchak as of January 31, 2015. 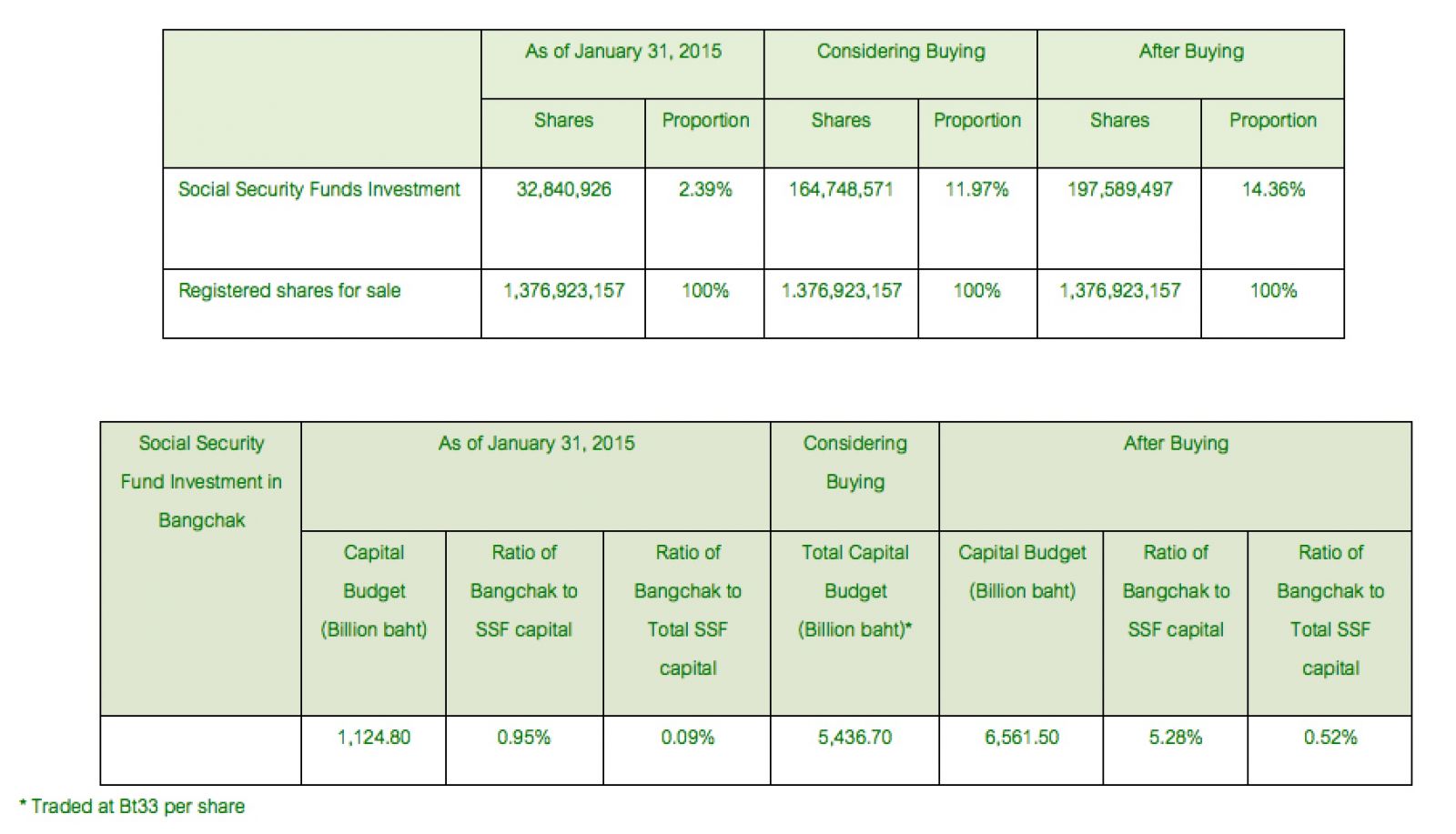 Investment Significance – If SSO committee approves of Strategic Investment, a purchase of 11.97 per cent stake in Bangchak Petroleum Public Company Limited sold by PTT is a great opportunity to join as a main stakeholder for partial power over energy policy decision and support public policy of energy pricing affecting investment and employment in the country. A delegate of SSO should be sent as a corporate committee. However, concerns over Strategic Investment that should be examined are about the risk of negative capital value caused by stock price volatility, liquidity risk, capital concentration risk and exit strategy.

Appropriate Pricing – The subcommittee holds two sets of opinion. A group sees the model of Strategic Investment as not for controlling a corporate and mostly SSO are offered to purchase stocks at discounted price but not lower than fair value while the other sees that if we wait for lower or market price, we might lose this opportunity.

Capital Budget and Investment Proportion – As SSO has already invested a large amount of capital in BCP, if considering Concentration Risk, SSO should not invest more than Bt4000 million according to typical investment criteria established by Risk Management Department of SSO.

If SSO committees agreed that SSF should start investing in the model of Strategic Investment, BCP showing a good quality and if SSF is able to take the risk, the consideration of investing in BCP with the appropriate price and increasing capital budget could be taken into account. The following are the conclusion and opinion of investment subcommittee of SSF.

1) Social Security Fund have started investing in stocks in  2003 despite the fact that it is a risky asset. For the long term investment, SSF has an allocation to highly secured assets and strictly complied with investment regulations. The returns from investment are 15 per cent each year from common stocks sale and cumulative dividend for more than Bt50,000 million. However, for the past 10 year, the focus of SSO plan is on passive investment where the proportion of investment in each company is less than 3-4 per cent of authorized shares. Nevertheless, the SSF has been growing rapidly up to  Bt1.25 trilion at present. Currently, if great opportunity arises for SSO to invest in a good stock, increased proportion of investment can be considered (5 – 10 percent of authorized share) as in the concept of Strategic Investment. Also, considering sending a representative as a corporate commitee as praticed by world-class investment fund i.e. GIC, Temasak of Singapore, EPF of Malaysia and CPPIB of Canada.

2) PTT Public Company Limited established contact with Social Security Office about the share sale of Bangchak Petroleum Public Company Limited owned by PTT of 27.22 per cent. The sale were divided into 2 parts, 15.25 percent sold to Vayupak Fund, Ministry of Finance and the remaining of 11.97 per cent will be sold to whoever provide the best quotation and open for everyone.

3) Bangchak Petroleum Public Company Limited (BCP) was founded in 1985 and currently generating revenue from oil refinery, petroleum service station and power plant business. SSO has invested in BCP debentures for Bt297 million and common stocks for approximately Bt1,125 million or 2.39 per cent of authorized shares. Considering Risk Model Framework, SSO is able to invest in BCP debt instrument for not more than Bt4,055 million (Nonetheless, SSO is considering the investment is BCP debentures with the amount of Bt500-600 million, if the investment is made, the remaining amount will be Bt3,500 million).

4) BCP is considered to have good fundamentals with 3 main business (1) Oil Referinery Business with the potential to refine crude oil of 120,000 barrels per day or of 11 per cent of oil refinery potential of the country (2) Petroleum Service Station Business with 1,069 stations and has the second largest market share of Thailand (3) Power Plant Business with the contract to sell 188 Megawatts for Provincial Electricity Authority (PEA) and Electricity Generating Authority of Thailand (EGAT). Therefore, SSO has examined the company foundation during 2015-2020 expecting BCP to hold EBITDA of approximately Bt10,000 million each year with the annual net profit of Bt5,000 million and with earning per share of Bt3.5, market value per share of Bt33 per share, the P/E ratio at a multiple of 8.3 and the Dividend yield would be 3%. The board of subcommittees sees that BCP faces business risk caused by external factors; oil price fluctuation in global market and the decrease in oil demand or even internal factors; risk in new unprofitable business investment. Besides, investing in BCP shares poses 3 more risk factors (1) Short-term share price fluctuation-In 2014, the price dropped to the lowest of Bt28.25 and raised to the highest of Bt37.50. (2) Liquidity risk – This makes selling share in secondary market more difficult and (3) Concentration risk – This increases the investment ratio of SSO in BCP from 0.95 to 5.28% of annual stock investment capital while the ratio of BCP in the SET100 Index is 0.41% and ratio in energy sector investment increased from 13.90 to 17.69% of stock capital as the energy group stocks ratio in SET100 Index is 15.55%. (6) Delegate of Krung Thai Asset Management Public Company Limited (KTAM) as a director of Vayupak Fund revealed that Fund Investment Committees has agreed to invest in BCP in the ratio of 15%. The reason is that BCP has several business lines like oil refinery, petroleum station and solar farm which are stable and likely to grow in the future. Vayupak Fund will invest in BCP in the long run as Strategic Investment to disperse investment because they are currently facing concentration investment. The estimated target price of this investment is Bt40.95 and expected dividend payout ratio is at 4% this year. A number of subcommittees think that the estimated target price by Vayupak Fund is high. Considering risk factors caused by oil price fluctuation and increased capital expenditures (CAPEX), the target price should be lower than this. (7) SSO estimated by several means for the current fair value of BCP is between Bt27.54-33.09 per stock and evaluate fair value by DCF valuatiion method of Bt33.09 per stock in case of similar base as Bloomberg Consensus survey and global market (closing price on February 13, 2015 is Bt32.50).

It is noteworthy that SSO has previously invested in a very few market that it was believed to fail at promoting Fund growth. However, this investment in BCP is an aggressive step and taken the high ratio of 14%. This is certainly an important investment which insured person should have information and seek to find the significance of this investment and whether it will be beneficial to the Fund or not ?