In the beginning of March 2015, The Department of Local Administration and Ministry of Interior published an official document to all provincial governors regarding the issue of “Training for a process to procure CCTV for Local Administrative Organizations”. In this official document point out that the Office of the Auditor General of Thailand by Special Department of Examination sector 15 informed that they had inspect CCTIV installation project by southern government sectors in Songkla and Satun. Its result shows that the process of the project was not properly circumspect for instance; a failure to an approach or a method to indicate a neutral price for the CCTV, a checking of the CCTV, an effectiveness of the CCTV and an beneficial integration of the CCTV. 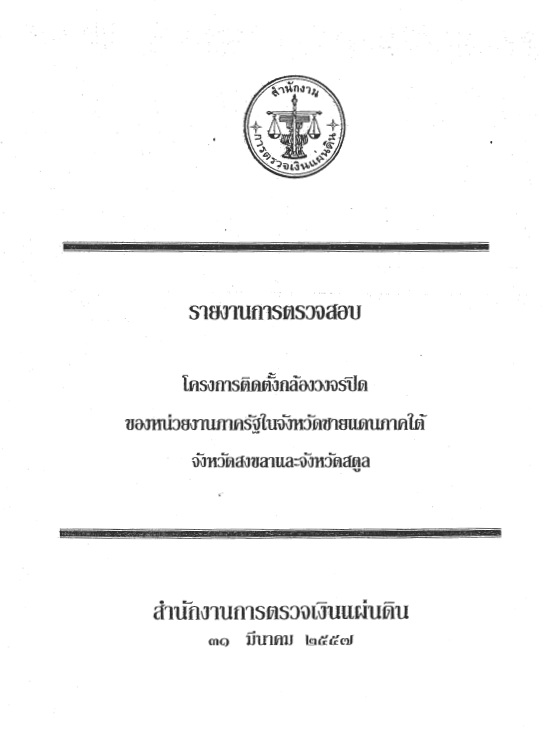 The Office of the Auditor General of Thailand indicates in the report “the inspection of CCTV installation project by southern government sectors in Songkhla and Satun” that provinces in the southern border is a problematic area having peace and violence issue for a very long period of time. The government has spent a huge budget and an enormous number of human resources to solve these continuing problems. The budget using to solve these conflicts tend to increase and the projects of installing CCTV for government sectors have rose as well. These CCTV installation projects tend to be separated and not as a cooperative project. The projects do not show much integrations and also cause complication which lead to inefficient budget.

The Office of the Auditor General of Thailand inspected the CCTV installation projects by government sectors in two southern provinces which were government sectors and local administrative organizations in Songkhla and Satun from budget year 2012 to 2013. The numbers of the budget were 287,372,776 baht, allocated 270,175,776 baht for Songkhla and 17,197,000 baht for Satun.

A random sampling research was employed to examine 10 government sectors and local administrative organizations in Songkhla and Satun. A Purposive Sampling consisted of 8 organizations from Songkhla (Songkhla provincial administration, Hat Yai municipality, Chana sub-district municipality, Tha Muang sub-district administration, Songkhla provincial police office, Natawi distrct, and Khun Tut Wai in Chana district) and 2 organizations from Satun (Satun provincial police office and Jeh Bi Lang sub-district administration). The total can be counted as 18 projects and valued at 185,103,526 baht. The inspection of 873 CCTV cameras of all 895 cameras by the office of the Auditor General of Thailand started in October 2013 to January 2014. The inspection’s result consists of three main issues as follows.

Finding 1: The process of CCTV installation by southern government sectors was not as circumspect as it should have been.

In addition, inspection found indiscrete CCTV installation plan and procurement process ithat 7 organizations used only single delivery consignment. Moreover, it was found that 7 organizations did not examine the CCTV before installing, there were neither plans nor electric circuit plans that show areas of the CCTV, instructions and attributes of the cameras, Serial Numbers of the camera, electric wiring signals, types of electric wiring signal and other equipment for examples. Case examples include a contract from Songkhla provincial administration regarding item checking and receiving form. It shows evidences of signed receiving form but no evidences of photos of each item along with installation records.. For Hat Yai municipality, a contract code 15/2554 shows that there was a receiving item form with photos but there are no installation records from suppliers.

The Office of the Auditor General of Thailand indicates that this indiscretion of the local administration organization will result in risks that CCTV will not meet the qualification equivalent to the contract that had been attached with received invoices.

Finding 2: The process of CCTV installation of southern government organizations fail to fulfill its objectives.

From the inspection of the Office of the Auditor General of Thailand found 10 organizations unsuccessfully provide CCTV installation for southern government sectors and fail to reach the objective. For instance; they could not maintain to make sure that all of the cameras are ready to be used at all times. There are only 4 organizations that the inspection shows that system of all CCTV can project all photos, other 6 organizations consist of some cameras that cannot show photos or cannot work properly. The opportunity cost by these problems can be approximately valued at 32,282,841.49 baht. When trying to compare the amount of the cameras which have been inspected of all 873 cameras, it shows that only 675 CCTV monitor that work properly.

Besides, the inspection also found that there are CCTV could not give full details especially numbers on a license plate which can lead to a surveillance of terrorism, crime and traffic law breakings. From a retroactive inspection of the photos from the CCTV of 10 organizations found that the cameras could indicate materials, brands, and colors of a car but can hardly indicate numbers of the license plate during day or night. In worst case, at nighttime there are obstacles like flashes from other vehicles which can result in a blurry photo from a reflection of the camera.

The cameras which could not indicate the license plate number and had troubles saving clear photos at night is an obstacle to the surveillance to terrorism, crime and traffic law breakings, hence the projects’ failed to fulfill its objective. From observing data from 10 organizations; 6 organizations have CCTV capable of recording for less than 30 days while only 4 of them has the capability to keep record for over 30 days.

Finding 3: Southern government sectors have not preceded a project to integrate CCTV system effectively in the mutual area for mutual benefit.

The inspection also found that there were installations of CCTV in the same are such as an installation by the CCTV of Songkhla provincial administration and Hat Yai municipality on the same electricity pole on Chai junction in Hai Yai. From the inspection of the Office of the Auditor General of Thailand indicates that the duplicated installation lead to the process of the same recording and also the loss of budget without advantages.